You are here: Home › Recognizing those who lead our organization
By Lisa Luciani on March 9, 2020 in Inspiration, News

Our Board of Directors contribute so much to our mission and work. Please join us in recognizing all that they do for the organization.

Meet all of our current Board members.

Appreciation to Outgoing Board Members 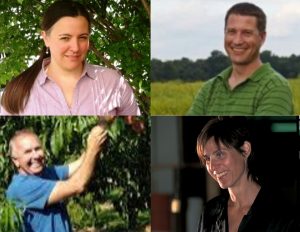 Four amazing Board Members finished serving several terms: Melissa Benedikt-Blindow, Kristin Powers, and Mike Smolak. We want to recognize these individuals who have contributed so much to Land For Good for many years – and still remain active supporters, with several continuing to serve on our Advisory Council.

Melissa Benedikt-Blindow spent two decades working in the field of sustainable community development. She was a farm seeker client of Land For Good before joining the staff as NH Field Agent and Program Coordinator from 2012-2014, helping hundreds of New Hampshire farmers and landowners,and organizing and delivering many collaborative land access events across the state. Melissa’s family owns and operates Benedikt Dairy in Goffstown NH where they produce raw milk, raw cream, yogurt, cheeses, beef and vegetables directly for the community – and operate on leased land. We thank Melissa for her dedication and experience and 3 years of service on the Board.

Clem Clay is the director of the UMass Extension Agriculture Program, an educational outreach program that serves farmers, landscape and turf professionals, fruit growers, arborists, nursery owners, flower growers, service providers, public agencies, non-profit organizations and businesses. He previously served as executive director of Grow Food Northampton, a non-profit dedicated to building a sustainable and fair local food system in the Northampton region, and  as Connecticut River Program Director for the Trust for Public Lands, where he protected over 400 acres of farmland. A Vermonter with degrees in soil science and public policy, Clem has been a farmer, educator, and advocate of New England’s agricultural landscape and heritage. We thank Clem for his expertise and commitment and 12 years of service on the Board.

Kristin Powers has been a long-time supporter of our work – and until recently was a long-time Keene NH resident. She is an artist and former designer and founder of Trikeenan Tileworks, and has also served as Arts Program Director at Monadnock Waldorf School (NH). She is currently teaching art in Asia. We thank Kristin for her creativity and passion and 7 years of service on the Board.

Michael Smolak, Jr. has owned and operated Smolak Farms of North Andover, MA for nearly 50 years. This XX generation farm is now diversified and includes a farm stand, bakery, several pick your own enterprises, and offers educational programs, events, and a dinner series. The farm is a popular agritourism and weekend destination for greater Boston, and frequently profiled in the local food and lifestyle press. Michael currently sits on the Agricultural Board of the Department of Agricultural Resources, and has served XX years as a past member of the Farm Service Agency State Committee, and the Massachusetts Fruit Growers Association. Michael was one of Land For Good’s first farm transfer planning clients. We thank Michael for his ongoing support and dedication and 12 years of service on the Board.

A Warm Welcome to New Board Members 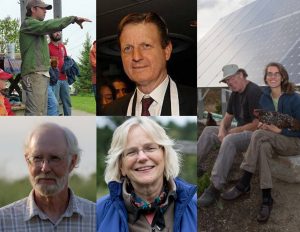 Andrew Marshall has been a supporter and collaborator of LFG since 2006 when, as Educational Programs Director at the Maine Organic Farmers and Gardeners Association (MOFGA), he contracted with Land For Good to provide land access training and support to the participants of the MOFGA Journeyperson program. That relationship continues today. He joined Land For Good’s Board initially in 2009, serving as Board President during an important period of transition. In 2014 he became Land For Good’s first Education and Field Director (part-time) after leaving MOFGA to devote more time to farming and his family. During his tenure on staff from 2014-2018, Andrew bolstered our many programs and services across New England. In 2018 Andrew was selected as the second Wang Food and Farming Fellow at Maine Farmland Trust, where he worked for a year conducting research on best practices for farmland reclamation. Andrew and his family operate Dorolenna Farm in Montville, Maine where they produce certified organic vegetables, tree fruits, and poultry. “I’m thrilled to be back in an active role,” shared Andrew. “LFG is so vital to the protection and viability of working landscapes in New England and around the country. I’m looking forward to contributing again to such an important mission.”

Tory McCagg and Carl Querfurth bought 193 acres of land in Jaffrey, New Hampshire in 2006. Best known for his work with Roomful of Blues, Carl is a trombonist, producer, composer and arranger. Tory is an author, and sometimes a flutist. They put their land into a conservation easement with the Monadnock Conservancy, dubbed the place Darwin’s View and, with the facilitation of Land for Good, signed a lease with their neighbors to farm a five acre field on the property. Their stewardship of Darwin’s View – and their life completely off-the-grid – has taught them the value of healthy soil in the effort to mitigate climate change and the importance (and difficulty) of making small farms viable.

Emmett Watson has deep experience working on major philanthropic campaigns at Columbia University, and the Museum of Modern Art. He is a movie and theater buff and philanthropist. He and his wife divide their time between New York City and an historic house in New Hampshire. Emmett is passionate about Land For Good’s mission, believing that farm succession, local and healthy foods, land preservation and an energy sustainable future are inextricably connected.

Tim Wheeler and Janet Woodward own and operate Indian Head Farm in Berlin, Massachusetts as a sixth-generation family farm where they raise small fruit and vegetables. Tim has served on the local and regional planning boards and several agricultural organizations representing the interests of Massachusetts and New England farmers. Janet also grew up on a sixth-generation family farm in Connecticut inspiring her early devotion to the land, family and the past. Their interest in sustainable agriculture and finding common ground drew them to Land for Good’s innovative yet practical methods of keeping farmers on the land.

Meet all of our current Board members.

Microgrants available to help farmers access and secure land, expand their farm, or plan a farm transfer
Action alert! Make sure farmers are in the COVID-19 stimulus support bill