You are here: Home › Our Farm Search: A Lot of Hard Work … and a Little Serendipity
By Jenny Wooster on September 21, 2013 in Stories 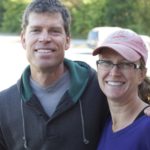 My husband and I began to look for our own farm to call home in 2003. As produce growers, we’d been doing farm work independently since the mid-late 1990s, and together at a non-profit organization’s farm on the North Shore of Massachusetts since 2001. We were seeking a place where we could farm as our full livelihood, set down roots and raise children, with some tenure and autonomy.  Geographically, we first cast a wide circle, but over time pinpointed where we’d be happiest living – in the Connecticut River valley, preferably in Massachusetts (near where I’d worked on farms in Hadley and Amherst) or Vermont (near Bruce’s family in White River and Norwich).

We took initial steps, including participation in an agricultural business planning course and writing a business plan. Lists, over and over again, of what was “necessary” (twenty acres of prime farmland, irrigation potential, solid structures, finance-able); what would be “lovely” (off the main road, near a nice town, not too much junk to clean up, good school system), and what was “icing-on-the-cake” (a pond!). We were seeking a situation where we could run our own business and live independently as a family, but we didn’t necessarily need to own the land.

The land search had us looking everywhere and talking to everyone: land link, land trusts, real estate agents, and other farmers. We spent weekend days driving around areas we’d like to live, swooning over some of the land. We sometimes stopped when we saw a farmer-type outside and chatted her or him up about the lay of the land. This driving around and talking to folks probably gave us the most leads. 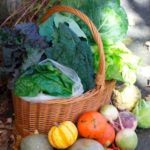 About a year-and-a-half into the search, we fell in love with a riverside farm in Springfield, Vermont. We’d been directed to the place by a neighbor with whom we stopped to chat. Twenty-five acres, beautiful old barn, fine small house. Cons: difficult location for a CSA; and sandwiched immediately between two conventional farms. The old widow who owned it, in her nineties, had lived there since she’d married at nineteen! After several visits and an appraisal, we had to accept that she wasn’t going to budge for less than half a million – for a farm that appraised at $275K. We were discouraged but realized that this situation was not unique. The vast majority of available farms that we saw were impossibly overpriced, when considering the agricultural earning potential and thus our ability to finance. Back to square one.

During this time, we did other things related to our farm search, such as taking stock of our own finances. In our early 30’s, we had no debt and about $50K in savings. We also familiarized ourselves with the Farm Service Agency, and we met with lenders at Farm Credit. There were many times that we felt as if we were just spinning our wheels, seeking something that didn’t exist, or that we could never afford. We both considered other career paths!

My husband got into the habit of making a round of calls every few weeks. He would pick up clues here and there, or contact a land link lead or a farmer friend. One day, he read in the paper that the hydroelectric power company up the Connecticut River was being sold. He wondered if any of the floodplain fields along the river would also be in transition. Not finding out much at first, he just called up the office of the Commissioner of Agriculture in New Hampshire. The Commissioner himself, Steve Taylor, talked a bit with Bruce. After a few minutes, he said, “I don’t know about that river bottom land, but you should call Albert Hudson in Winchester. He sold his cows and is looking to pass on his farm. Give Albert a call.” Just like that, after probably hundreds of conversations, we fell into the one that made the difference for us (though of course, we didn’t know it yet).

So we called the Hudsons in September of 2005. I was seven months pregnant with our first child when we drove out Route 2 from eastern MA, just over the state line into New Hampshire. The farm was beautiful and well cared for, with a decent house and sizeable barn complex. It was bigger than we’d ever considered, with seventy-one acres total, nearly forty tillable. Albert and Judy Hudson were welcoming people, and interested in our story. The farm was not “officially” on the market, though they’d contacted a realtor and had some interest from a few local dairy farmers. We spoke in generalities. We left them with a copy of our business plan. On the drive away, Bruce asked what I thought. We’d seen enough farms by then – over forty we’d visited or driven by in a couple years – that I answered simply, “If we can afford it, it’s a great farm for us.” 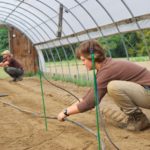 Over the next few months, we welcomed our daughter into the world and talked occasionally with the Hudsons. Just after Thanksgiving, Bruce came back from a second visit to the farm, ready to move. His enthusiasm was contagious, and our talks with Albert and Judy got more serious. They agreed to rent the farm house plus an acre of land to us for a year, while we figured out our financing and Albert continued to grow corn for silage to sell to neighboring farms. Because Albert and Judy had invested their lives into the farm, and because they planned to be neighbors of the farm in their retirement, they really wanted the new farmers to be serious and to succeed. The year of renting gave the four of us a chance to get to know each other better. That year was also a great time for our young family to get our feet on the ground in a new community.

We completed the farm purchase in March of 2007. The Hudson’s hold a first mortgage, with a 20-year term. Because of the owner-financing of half the mortgage, we were immediately eligible for a second mortgage through Farm Service Agency with a low-interest, 40-year term. We bought the farm with no down payment, at a cost of $420K. In spite of the property appraisal of $450K, Albert and Judy decided to sell for less than that, reasoning that we could use that money upfront to repair the failed septic system and leaking big barn roof.

In our experience, the Hudsons were unique sellers, in several key ways. Their two adult children, who loved growing up on the farm, had nonetheless long been clear that they were not taking over the farm. The Hudson’s had already built a modest second house on a corner of the farm, where Judy’s mother had spent her elderly years, and where they both hoped to spend their retirement. The Hudson’s had sold the development rights for most of the farm to the state in the eighties. While this didn’t legally limit the farm’s selling price, the Hudson’s felt that it ethically did. They intentionally priced the farm for a farmer buyer, even though they certainly could have earned more than they did on the sale. 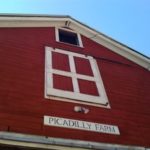 We launched Picadilly Farm and began selling our community supported agriculture (CSA) shares in 2007. We borrowed additional money, mostly interest-free, from a few friendly lenders, to capitalize the business. Essentially, we made the choice to debt-finance the farm and business, in order to get things “set-to-roll” right from the start.

After five years, our business had grown to over 700 CSA shareholders, both locally and in eastern Massachusetts. We raise small-scale livestock and eggs, and are certified organic. With an annual gross of about half a million dollars, we’ve been able to keep up with our mortgage payments and chip away at our start-up debts. Still, we know that we’ll be dreaming of our own retirement long before the mortgage has been retired!

Editor’s note: To find out how Picadilly Farm has been doing since 2012, check out their excellent annual reports. In 2016, they report that “Jenny and Bruce personally hold the two farm property mortgages, and Picadilly Farm LLC rents the land and barns from us. Our two mortgages are held by the Farm Service Agency/US Department of Agriculture and by the previous farm owners.”