You are here: Home › The Importance of Negotiation and Communication in Farmland Access: A Farmer’s Perspective
By Richard Lee and Kate Del Vecchio, Tender Soles Farm on August 22, 2014 in News, Stories

This essay was written in 2014 by Rich Lee and Kate DelVecchio of Tender Soles Farm in Richmond, ME. Tender Soles is an organic, horse-powered mixed vegetable, herb, and flower farm with a focus of on-farm education. LFG’s Maine Field Agent, Jo Barrett, provided support and guidance to Rich and Kate through many phases of their land access journey starting in 2012, when they were JPs on else’s farm. This essay was written at that time (?). She helped them plan for and make the transition to leasing and farming on their own for the first time and ultimately to financing the purchase of their own farm in 2015.  This support is made possible by LFG’s collaboration with MOFGA to support the land access needs of farmers in MOFGA’s Journey Persons program. 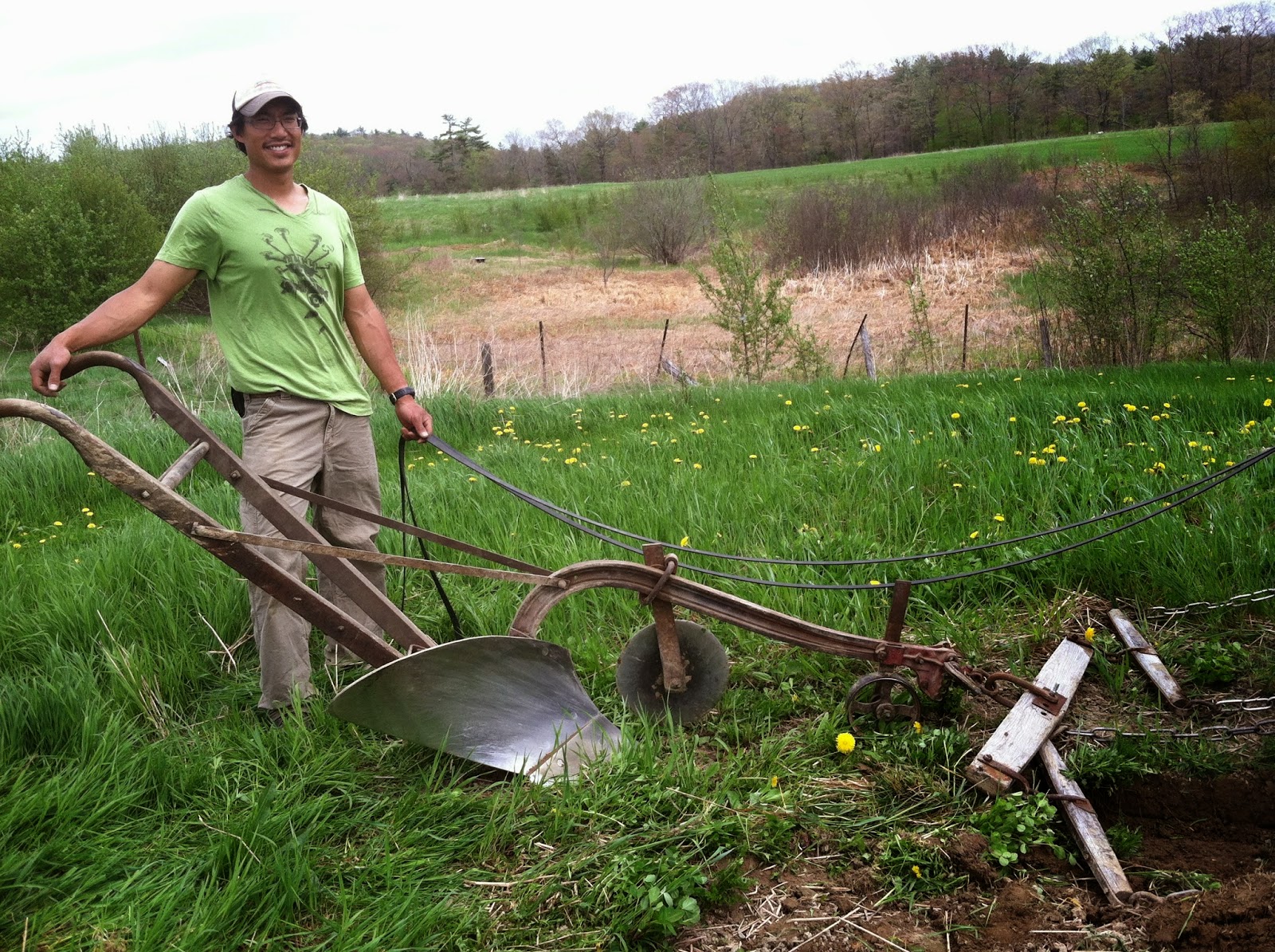 Our negotiations began with our friends and their farm. They are leasing a farm with approximately 5 acres of prime vegetable ground as well as access to three barns with a workshop.

Entering into our relationship working on the farm, Kate and I combined had 6 years of vegetable growing experience. The owners had almost 3 years under their belt running the farm, but little experience managing employees other than some volunteers and spot part-time help and had approximately 3 years combined farming experience in short stints. Kate and I each previously spent two years apprenticing on various vegetable farms. We additionally had worked hourly for a few other farms in the area; we had a good sense of management styles and what we liked and didn’t like about each farm manager’s style.

Our friends approached us about potentially partnering into the farm side of the business and definitely wanted to have us work there for a year since they knew we were looking into acquiring land of our own to either lease or buy. Our goal for the year at a bare minimum was to find a place to start farming with some autonomy – especially to learn with and establish relationships with our draft horses. All of us were very excited about the potential relationship we were going to build and dived into negotiations head-first with much enthusiasm. The two of us had ideas of somehow buying into the partnership through a combination of sweat equity and cash. We knew we all had much to offer to each other and were initially excited about the partnership idea, but couldn’t wrap our heads around it logistically.

Eventually we all decided that we should try things out for a year with the two of us helping manage the farm. It wasn’t clear how that would pan out in terms of responsibilities and compensation for the two of us and we never got that fleshed out when we began the work agreement. We the employees wrote the agreement. This was good in that we had a lot of control over the terms of the agreement, but provided a challenge because several times into the relationship the owner misinterpreted the contract; something we think could have been avoided had he helped author the contract.

After a couple months’ negotiation, we were to be subcontractors paid a monthly salary according to what we calculated we needed to live comfortably in the house we were renting next door and to cover our expenses with a little bit of savings. We wanted an hourly rate, but this was considered too expensive for the owner. He did, however, offer us barn space and as much pasture as we would like to manage intensively for the horses, which saved us tremendously on horse feed by extending their grazing into December. Working roles were not clearly defined other than that the owner was deciding what needed to be done that day with some of our input.

Once things got started with our employment, issues immediately surfaced that we didn’t foresee. Particularly, the owner’s management style was looser than we were used to and we had expected more instruction. He wanted to respect and acknowledge our experience by giving us some freedom of responsibility. Meanwhile, since we were new to the farm, we wanted to respect his in-place systems and add things where we felt we could improve efficiencies and techniques with the farm. We had an expectation that he would be still giving the majority of instructions since he had infrastructure and systems already in place and was adapting them to accommodate horses into the cropping system.

We quickly learned that it pays to have someone who is in charge when there are so many people with opinions. There were many disagreements about how to do things, but there wasn’t a good way to discuss them other than trying to bring things up while working in the field. That did not work because we never felt composed enough to discuss things in the heat of fieldwork and instead all of us internalized our thoughts. In retrospect, this is a prime example of assuming things will work out rather than putting a little extra work in on both sides to clarify what it was that we expected of each other.

One of the owner’s main expectations was that we were to work from sun up to sun down and that farming is a lifestyle so we should expect to be working as long as there is light. We didn’t agree with that considering our compensation didn’t justify us working our butts off for something we aren’t getting equity out of and it didn’t fit into what we wanted for our quality of life (being able to cook meals at lunch and dinner, getting reasonable sleep and a small amount of time to relax). A month into employment we had a meeting about the time issue with us eventually agreeing that we had set 60 hours per week (something that wasn’t originally included) not including horse chores unless they were being used on the farm that day.

Another example of the importance of clear and direct communication about expectations came up when managing pasture for his calves and our horses. I had been managing the horses’ grazing with daily paddocks in a large pasture at the back of the farm. Once the calves, who were close to the barn, needed more pasture, things became unclear, because the owner was the one making decisions about the calves. There were times where I felt the need to move the stock or address the calves getting out of the pasture, but didn’t feel I had the authority to do so. I felt frustrated that the owner wasn’t moving them himself or hadn’t authorized me to do so because it was impacting the grazing quality for the horses. Kate and I feel that all this stress (on the humans and on the livestock) could have been avoided if all sides had met beforehand to discuss any changes that were to be made to management and roles when the calves arrived. We think this also may have been avoided if there was a clearer hierarchy of decision-making about who was “in charge of the pasture.”
This happened at least two more times during the season with the same results. We had a meeting after the third incident where I sat down and laid everything out on the table to try to make clear that I was upset, why I was upset, and my hope that he will at least address those types of decisions in a clearer manner in the future. After a long, intense conversation and a few more small ones, we both admitted feeling much better about having communicated what we were thinking.

In the middle of the season after consulting with a mentor, Kate and I proposed having regular weekly farm meetings. There was little initial structure and what little structure there was, we provided as issues and things to discuss. Still, responsibilities were not distributed in a clear way and we continued to struggle to understand the decision-making process going through the owner’s head. In the end, the meetings didn’t work because he didn’t buy into the process at all so we put our heads down and did the work ahead of us.

By August, the owner began to realize that he perhaps needed less of our time and so proposed we cut our hours by half. We began tracking hours to make sure we worked the appropriate number of hours per week. About a week or so into this amendment to our contract, he came back asking for more hours. However, we wanted to keep the amended agreement because we had committed to working elsewhere for the rest of the week, feeling that we didn’t want to take changes to our contract lightly.

By November, things ended amicably with the owner though both sides felt that our relationship was and still is a bit strained. We get along well enough and the two of us are walking away with an invaluable learning experience on management and organization. Lesson number one: No matter how good friends you are, it’s business, make no assumptions – especially because you are friends – and you need to be as clear as possible. Kate and I are glad we wrote a contract, but wish we had been clearer and more specific on time expectations, responsibilities, and overall roles. We also strongly suggest that the contract writing and negotiation be a process mainly driven by the employer since they are the ones setting up most of the expectations when it comes to work and responsibilities; thinking about peoples’ roles is crucial to having a plan and avoiding conflict.

In addition, it is very important to know your boundaries before you begin negotiating a contract or lease (how much compensation you need, what information you want in writing, what roles and responsibilities you are willing to take on, when you are OK with walking away) and to remain clear and consistent with your boundaries. Examining what contributes to a positive quality of life is a good way of informing your boundaries. It does you no good to enter into an agreement that looks good on paper, but doesn’t make you happy.

An important lesson that we plan to employ on our farm is to have regular farm meetings, for a number of reasons: to be able to check in with how people are doing, to resolve conflict before it explodes, to delegate responsibilities, to facilitate planning, and to record and review things that are important to the farm’s functionality.

Finally, we are all independent people by nature. It’s easy to get caught up in your own thoughts and ideals. It’s harder to be kind and forgiving to someone else who crosses those internal boundaries, but not impossible. If you are observant of each other, communicate clearly, write things down, and address things before they turn into a big deal, you can avoid a lot of stress and strained relationships. Having an advisor or mentor look at things from the outside is very helpful when you’re feeling stuck in the rut of your personal perspective.