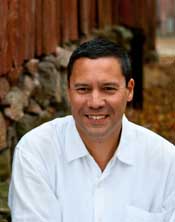 Land For Good (LFG), a leader in regional and national farmland access work, announced that Jim Habana Hafner was appointed Executive Director on January 1. He succeeds Kathy Ruhf, who remains with LFG as a Senior Program Director. Land For Good has been laying the groundwork for this transition for nearly two years.

“I believe in timely and thoughtful succession for LFG, just as we encourage with farm families. I’m happy to hand over the Executive Director reins to Jim and to concentrate my contributions in a new role,” said Ruhf. (Read Kathy’s letter to supporters.)

Founded and still based in Keene, Land For Good works throughout New England helping farmers access and transfer farms and farmland. It is one of the few groups nationally focused on farmland access and transfer issues. LFG provides education, resources and direct services to farm seekers, established farmers, landowners, and community stakeholders in all six New England states.

Hafner grew up in western Massachusetts and has over 20 years of program, outreach and research experience in agriculture, community development, and public health. He has worked with advocacy groups, farmers, and researchers on land tenure, farming systems, agricultural development, and watershed management, in New England, California, Washington DC, and overseas. With graduate degrees in International Agriculture (University of California at Davis) and Natural Resources (Cornell University), he has also taught university courses in environmental studies, soil science, and geography.

“Secure, long-term access to affordable and productive farmland on equitable terms is a key to sustaining farming opportunity around the world. And it’s no less important to farming opportunity, food security and quality of life here in New England,” observes Hafner.

LFG has been working with farm families for 10 years. When they began their work on farmland access, tenure and transfer there was scarcely any recognition of these topics – let alone resources specific to this region. Over the ensuing decade, land access has become an issue of priority concern among all farm and food system stakeholders in New England and nationally.

In New England as nationally, access to affordable, secure farmland is a top challenge for both new and established farmers. At the same time, with the average age of farmers at nearly 58 years, 70 percent of farmland will change hands in the next 20 years. Many senior farmers lack adequate succession plans and identified successors. Given high land values and the financial needs of exiting farmers, working farms are often most vulnerable during a generational transition. Farm seekers and farmland owners need the support and assistance provided by LFG.

As LFG Deputy Director, Hafner’s development expertise and leadership skills played a key role in honing the organization’s operational and management framework. He spearheaded outreach programs and a new website. His work with advocacy groups has increased the organization’s local and regional attention. “There’s really no better testament to a healthy organization than a succession that retains and attracts the best. The combination of Kathy and Jim in the new structure is a boon to LFG’s stakeholders: terrific continuity, deep expertise and innovative, mission-centric capabilities. I’m so excited for the future with this amazing team,” said Deborah Leonard Kosits, Executive Director of New Hampshire Music Festival and LFG Board Vice President.

“LFG’s work goes straight to the heart of a core challenge facing our regional farm sector and food system – passing on farmland and working farms to a new generation of farmers in a way that provides security for exiting and beginning farmers alike,” says Hafner. “Our farmers are the backbone of the healthy, resilient, sustainable food and farming system that we all seek.  That’s why the community support for farming that is so evident in New England is also so critical to keeping working farms viable for future generations.”

My transition at Land For Good
Pieropan Farm, Ashfield MA