You are here: Home › Partnering in Rhode Island on local agriculture grant
By Lisa Luciani on November 15, 2016 in News 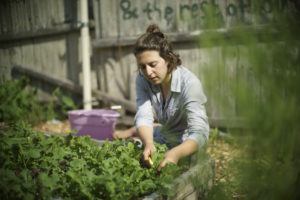 In Rhode Island, a unique partnership has provided grants to directly benefit and strengthen the local food system since 2014. The Local Agriculture and Seafood Act (LASA) Grants Program is made possible with funding from the State of Rhode Island with matching funds from the Henry P. Kendall Foundation, the van Beuren Charitable Foundation, and the Rhode Island Foundation.

A 2016 grant recipient, the Rhode Island Land Trust Council (RILTC), is partnering with Land for Good on initiatives to help sustain agriculture in Rhode Island by addressing the challenges of accessing farmland. Focus areas include land linking and succession planning to improve farmland access and transfer in the state. RILTC organizing workshops, in partnership with land trusts, to encourage landowners with suitable land to make their properties available to farmers under lease or other tenure arrangements. The first two workshops were well attended. These were hosted by RILTC in cooperation with Land For Good featured Tess Brown-Lavoie, LFG’s Rhode Island Field Agent and a farmer and community organizer, as well as local land trusts in Aquidneck and South Kingstown.

Rhode Island Land Trust Council and land trusts around the state are excited to be working with Land For Good on projects to help connect farmers with land where they can grow food.  It’s important to keep Rhode Island’s remaining farmland in agriculture.” says Rupert Friday of RI Land Trust Council.

RILTC and LFG will also co-host workshops for farmers planning for the succession of their farms to a next generation of farmers. A recent study, Gaining Insights, Gaining Access, released by American Farmland Trust and LFG revealed that farmers age 65 and older operate 29% of the state’s farms. They manage 21,700 acres and own a collective $310 million in land and agricultural infrastructure, much of which may transfer ownership in the next 10-20 years. Of these 363 senior farmers, just 11% have someone under age 45 working the farm with them, suggesting that a transfer of these farms to another farmer is far from certain.

At the same time, there is good news for RI’s next generation of eager farmers! According to the Census of Agriculture data (2002, 2007 and 2012) the state has seen a 13% increase in young (under 45) farm operators since 2002, the only state in New England with a net growth in young farmers since 2002.

It’s exciting to talk with landowners about the prospect of leasing land to farmers, because it addresses a major access need in the state; many small and beginning farmers are looking for ways to start and scale up their businesses, and in a state where land is so expensive, a lease arrangement can be the most feasible route to food production. Fallow land in more rural parts of the state could be used by urban growers who are constrained by the limits of city land access, or by farm workers and managers who hope to start their own farms,” says Tess Brown-Lavoie. “And at least at my farm, the landowner eats well, too.”