In 2008, the 4th generation owners of Langwater Farm in Massachusetts decided  to preserve eighty acres of their prime agricultural open land—the historic core of a peri-urban area. A long term revitalization of this prime natural resource was their goal.

As described on the Langwater Farm website, the farm is “80 acres total with half of the land wooded and the other half tilled for crops. Part of the property was originally de 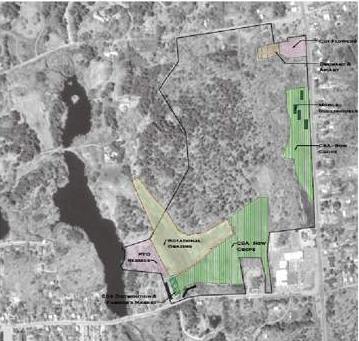 signed by landscape architect Fredrick Law Olmsted, the creator of Central Park. The beautiful farmland includes fields gently curving against woods, surrounded by stone walls, dirt roads snaking through the woods and fields, all bordered by Langwater Pond to the west.”

“In the early 1900′s, Langwater Farm was famous for its Guernsey cows and Clydesdale horses. After that, the farm had been mowed for hay until the Ames family decided to seek out a farmer to begin a community farm for the town of Easton. Working with a non-profit organization [Land For Good], the Ames Realty Trust collected proposals from farmers and ultimately chose the O’Dwyer’s to farm the beautiful land at Langwater Farm. 2010 marked the first growing season at Langwater Farm, named as a nod to the rich history of the land.”

By accessing Land For Good ag-savvy technical assistance, the Ames family extended the extensive in-house expertise they already had.

LFG staff and consultants developed and presented a range of potential land uses for the 40 acres of hayfields with the objective of establishing a sustainable leasehold for an experienced farmer that would fulfill the owners goal. LFG recruited candidates, made recommendations, and drafted a 5 year agricultural lease. The process went well, and in October, 2009 a lease was signed with Stone Soup LLC, an experienced farm family team taking over operations and implementing a farm business plan that will fulfill both the farmers and owners’ needs.

One Langwater farmer told us, “Thank you. We could not have done it without Land For Good. Your expertise has been invaluable.”

If you’re a farmer …

I have had the pleasure of working with Land For Good for over five years. I am always amazed by their passion to help beginning farmers, their extensive contacts throughout the region and across sectors, and their depth of knowledge — all of which make them so effective in everything they do.

“Farming is a magical way to make a living. It’s a way of life.”

What a successful year our program had! We couldn’t have done it without your help at Land for Good.

LFG is the lead organization in New England dealing with any and all issues pertaining to farmland access, tenure and transfer.

Land For Good helped us make sound land acquisition decisions. They gave us the confidence we needed to be successful.

[Dairy farmers] are very committed to the land and their communities and have traditionally been big contributors to rural life in New Hampshire.

I am launching a commercial farming enterprise that involves leasing land, equipment and infrastructure from multiple stakeholders … thanks to Jo’s [LFG Maine Field Agent] personalized attention we are equipped with the information necessary to craft satisfactory short and long-term lease agreements [and to] avoid the pitfalls commonly associated with such arrangements …

We had negotiated one lease by ourselves, previous to learning about LFG’s program, and had less desirable results. We appreciate having LFG as an advocate for our needs, anticipating possible conflicts and urging discussion before they become an issue – and strongly encouraging agreements to be made in writing.

I feel really lucky to be in company with folks like you and all the great resources you have developed. As a farmer and farm advisor, I can say that your resources really have helped me put land access and land access strategies into an informed perspective to go about helping others with confidence.

We found the farmer recruitment process to be more involved than expected. Land For Good helped us find the perfect farmers for our property.

Take this quick survey to help improve the website.