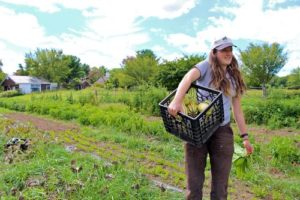 Tess Brown-Lavoie, a farmer and community organizer of Providence, has joined the regional group Land For Good to help tackle the growing needs of Rhode Island farmers for access to land, support for farm succession and transfer, and more secure land tenure.

Nearly one-third of Rhode Island’s farms and farmland are expected to change hands in the next decade, and access to land is a top challenge facing new and beginning farmers in Rhode Island and nationwide. Brown-Lavoie will work statewide by providing direct assistance and training to farmers, farm families and farmland owners who are seeking land, want to plan a farm transfer or wanting to make land available for farming, and collaborating on projects with local partner organizations. Land For Good is a New Hampshire based, New England-wide nonprofit that works to ensure the future of farming in the region by putting more farmers more securely on more land. Meet Tess

“Rhode Island has the largest percentage of new and beginning farmers in the US based upon the 2012 USDA Census of Agriculture, and also among the highest farmland values in the country,” explains Ken Ayars, Chief, Division of Agriculture, RIDEM. “Many of the new and beginning farmers are building businesses on leased land, and this dynamic combined with most farmers not having succession plans points to the need for focused effort on issues of land linking and succession planning.”

One of the biggest challenges for beginning Rhode Island producers is access to farmland. This issue has been identified by the Division of Agriculture, the Rhode Island Food Policy Council (RIFPC), Conservation Districts, Rhode Island Land Trust Council and Southside Community Land Trust. In particular, more effort must be put into making land available, affordable and secure for farmers. Many new and expanding farmers seeking land need technical assistance to access land and gain stable land tenure in order to meaningfully contribute to a sustainable food system in Rhode Island.

A related challenge is Rhode Island’s aging farmer population. Nearly one-third of the state’s farms and farmland are owned and managed by farmers at or beyond retirement age (US Census of Agriculture). Most are likely without an identified successor or succession plan, according to a recent study by American Farmland Trust and Land For Good (Gaining Insights). The 21,700 acres Rhode Island’s farmers manage and $310 million they own collectively in land and agricultural infrastructure will change hands in one way or another over the next 10-20 years. What these farmers do with their land and other farm assets as they exit farming will shape Rhode Island’s agricultural landscape for generations to come.

Tess Brown-Lavoie is a first generation farmer, organizer, and writer. She learned how to grow food in city lots and rooftops in Providence, RI and Brooklyn, NY. After growing up in a city in Massachusetts, working as an urban farmer was an access point to agriculture, laying the foundation for the business she is building with her sisters in Rhode Island. After various on-farm jobs and apprenticeships – from the Scottish Highlands to Brooklyn, NY – she moved to Providence and co-founded Sidewalk Ends Farm.

“The hiring of Tess Brown-Lavoie by Land for Good is welcome news because it is the first time Rhode Island will have a dedicated [Land For Good] field agent, and the State of Rhode Island is complementing this effort by the issuance of a 2016 Local Agriculture and Seafood Act Grant (LASA) to the Rhode Island Land Trust Council to partner with Land for Good on issues of land linking and succession planning,” says Ayars.

Brown-Lavoie co-coordinates the Young Farmer Network, which is based in Providence and connects members of the beginning farmer community in Rhode Island and neighboring states with a mission for a just, equitable, and sustainable local food system. She works on regional and national farm policy, serving on the National Young Farmers Coalition Advisory Committee. Lavoie has also served on the Rhode Island Food Policy Council since the beginning of 2013.

“As an active farmer and leader in Rhode Island agriculture, Tess brings a proven skill set and deep network of working partnerships to address these important issues,” says Jim Habana Hafner, Executive Director of Land For Good. “We’re excited to expand our collaboration with the groups leading the charge to make land more available and affordable in Rhode Island, and to provide education and services to farm seekers, existing farmers and landowners.”

Most exiting farmers in New England may have no one to take over the farm, new study shows
Real estate professionals eager to connect with commercial farm buyers